Do you have a leaky or burst pipe? Did you recently change all your pipelines and your plumber promised you that the pipes will not burst but here you are surfing the internet, finding a reliable plumbing service once again? Well, you are at the right place. Eagle Plumbing Services provides quality plumbing works in and around Melbourne, Australia, so that you do not have to deal with a burst pipe situation for several years.

A general problem that people face is frozen pipes that burst. Other problems can be pipe failure due to damage, age or misuse. It often is the case that people dump a lot of leftovers in their drainage pipes that causes a blockage and when the pipes get filled with water, it exerts pressure on the point where there is blockage resulting in a burst pipe. We often select quality pipelines during constructions and renovations because a burst pipe in the main system can cause greater damage than a burst pipe in the outer areas.

Imagine how a low quality plumbing works in your roof can cause considerable damage to your apartment or house. The problem is in how complicated systems have become and the usage of boilers, waste disposal systems and garden installations, all in a single house with tricky plumbing works that often leads to burst pipes and other damage. You could lose as much as 400 L which is two full baths for half an hour. Most people do not know this but a water protection valve can help reduce the damage to a great extent. 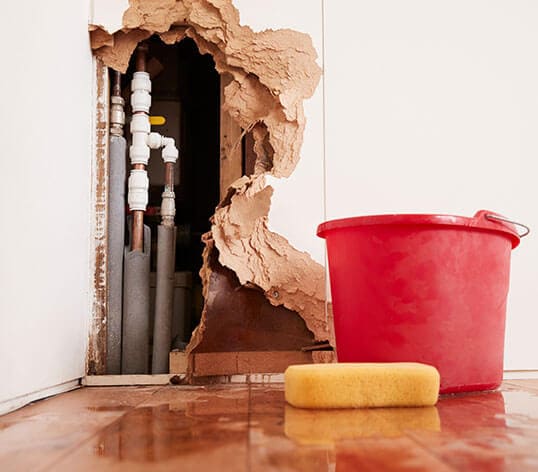 If you have a leaky or burst pipe, then you need to act promptly and try doing the following:

We are the specialists for repairs in burst and leaky pipes in Melbourne. Our services include:

At Eagle Plumbing Services, we bring lifetime solutions instead of causing future problems.

What Makes Us Best?

Get A Free Quote